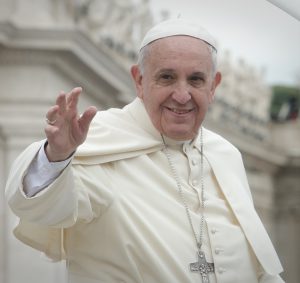 Born in Buenos Aires, Argentina, Jorge Mario Bergoglio became Pope Francis on March 13, 2013, when he was named the 266th pope of the Roman Catholic Church. Bergoglio, the first pope from the Americas, took his papal title after St. Francis of Assisi of Italy. Prior to his election as pope, Bergoglio served as archbishop of Buenos Aires from 1998 to 2013 (succeeding Antonio Quarracino), as cardinal of the Roman Catholic Church of Argentina from 2001 to 2013, and as president of the Bishops’ Conference of Argentina from 2005 to 2011. Pope Francis made his first international visit in July 2013, traveling to Brazil. In December 2013, Pope Francis was also named Person of the Year by Time magazine. To date, his tenure has been characterized by humility and outspoken support of the world’s poor and marginalized people, and he has been involved actively in areas of political diplomacy and environmental advocacy.